Dvory nad Žitavou is one of the oldest and biggest villages in the Nové Zámky district. The first written record of the village comes from 1075. Dvory nad Žitavou came into existence by the union of four colonies: Hudvord, Huba, Pazman and Vadkert. There was a royal estate on its land. The village got its name from the servants who were working on the property (Slovak „Dvory“ = dvorník; Hungarian „Udvard“ = udvarnok). In 1241, the village was almost totally demolished by the Tatars, but after the arrival of foreign colonists it started to develop again. In 1268, it had its own parish.  In 1307, the well-known ecclesiastical council was held on today’s Calvary. The evening bell, which has remained to this day is related to this event. On October 2, 1429, King Sigismund of Luxembourg placed Dvory nad Žitavou in the city rank. In 1462, Dvory nad Žitavou District, headquartered in Dvory nad Žitavou was etablished in Komárom County. 23 municipalities and 11 colonies belonged to the district. Around the year 1530, the Turks attacked the city. It was under Turkish occupation for 113 years. Since the 15th century, Dvory nad Žitavou was famous for its fairs and weekly markets, which disappeared only in the first half of the 20th century. The development of the village was stopped by the First World War. 133 inhabitants died on the battlefield. In 1939, the Second World War broke out. In the war and concentration camps several citizens were killed. In 1945, Ukrainian soldiers invaded Dvory nad Žitavou. After the Second World War, many Hungarian citizens were deported to the Czech Republic and Hungary. They were replaced by 241 Slovak families from Hungary and Romania. Dvory nad Žitavou has always had an agricultural character. On June 15, 1949, the local agricultural association was established, which was one of the best agricultural corporations in the country. From 1968 to 1991 the whole country, therefore Dvory nad Žitavou as well was under Soviet occupation. In 1989, a change of regime occured in the country after the Czechoslovak Socialist Republic ceased to exist. On December 31, 1992 Czechoslovakia split up and on January 1, 1993, the independent Slovak Republic was formed. 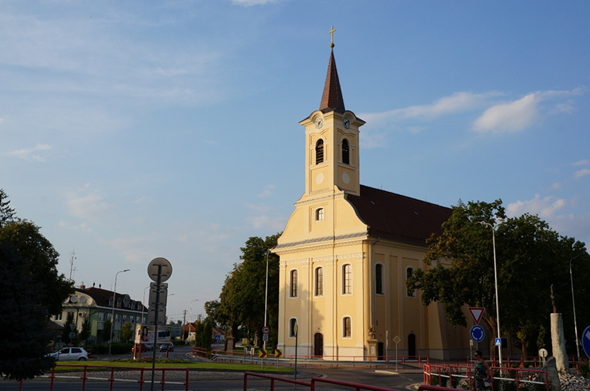 One of the most important historical monuments of Dvory nad Žitavou is the Calvary, which was also called as the hill of St. Martin. A. Majthényi set the goal of building Stations of the Cross, a central cross, a belfry and a chapel on the same place where the royal property was standing and where the council was held. The works started on October 31, 1855. Since the hill of St. Martin was quite shapeless, it had to be adjusted. 12 000 wagons of soil were taken for construction, on the hill and around it 7000 trees and bushes were planted. The ground around the hill was very marshy, so an access road and a bridge had to be built. The Calvary was consecrated on Sept. 16, 1860, by archbishop János Scitovszky. On the top of the Calvary, behind the belfry is the gravestone of A. Majthényi. 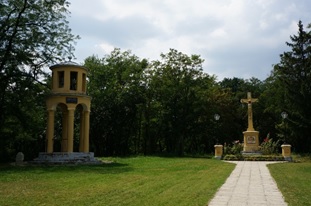 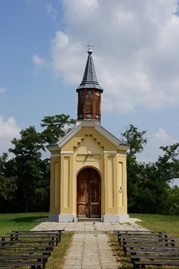 The baroque Roman Catholic church, dedicated to St. Adalbert, which we can find in the centre of the village was built in the second half of the 18th century. It was consecrated in 1776. Since the bastions of Nové Zámky were ruined, the building material which remained was reused to build the church. The main altar and the altarpiece are from 1777. In the church there are several other altars besides the main altar. The statue carved from wood of St. Adalbert, the Rococo style pulpit and the pictures of Via Crucis with German inscriptions, which come from a small Czech village called Svatá Kateřina, are all part of the temple’s precious furnishing. The church can be proud of its organ built by the Rieger brothers in 1885. It is still in excellent condition and to this day it is part of the church’s liturgical life. There is a crypt under the church, where it was presumably the entrance to the catacomb system as well. The crypt was first opened in 1942 after a long time, when they found 28 damaged coffins. Mostly priests were buried there. The catacomb system was probably built under Turkish times. It could be the hiding place of the crop and people as well. 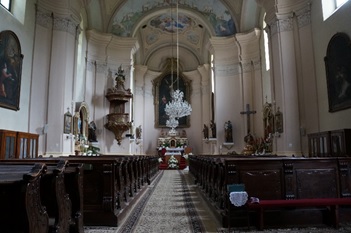 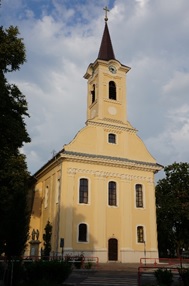 The old and the new building of the Catholic parish

The old building of the parish is the oldest edifice in Dvory nad Žitavou, which was built in 1761. The foundation stone of the new building was laid in 2003, the edifice was consecrated in 2008. It currently functions as parish office and pastoral centre.

In the centre of the village we can see the mansion of the Boncz family. It was built in the 17th century, renovated in 1781. Currently, the building functions as a café and a diner. Some shops are located here as well.

The old steam mill was built in 1906 on the square named after it. It burnt out in October 1911, only its walls and the engine room remained. Since 1936 it was powered by electricity. It currently serves as a depository.

The museum in the centre of the village opened its doors in 2009. The exhibited objects, photographs and agricultural tools reflect the customs and values of old times.

Memorial of the persecuted and deported

The monument located in the centre of the village was built in memory of the local Hungarian population displaced between 1946 and 1948 to the Czech Republic and Hungary. On a stone column we can see an open palm with a human eye in it. Around the monument on the ground we can see the names of the places where the inhabitants were deported.

The Kaszap István scout team no. 28 set the monument in 2003 on the occassion of the 10th anniversary of its founding. The local team was founded by the vicar László Elek, the first team commander was Blanka Balasko. The scout team still exists and is active to this day. The monument is decorated with historical and scout symbols.

In the village we can see several sacred monuments. The St. Orban Chapel is located in the wineyards and is dedicated to the patron of all wine-growers. It was built in 1760. There is a bell in its tower, inside we can find a small altar and sacred images. The monument of St. Florian, the patron of all firefighters is located in the churchyard and was made in 1855. Also in the churchyard is the crucifix portraying the crucified Jesus. In front of the entrance we can find the statue of the Holy Trinity and the statue of the Holy Family. The statue of St. Ladislaus is in front of the building of the Museum. The statue of St. Vendel was built in 1771 on a small hill on the Vendel Square. In the Cemetery of the Guardian Angel is the statue of the Guardian Angel, which was built in 1850. The statue of St. John of Nepomuk is next to the access road leading to the Calvary. The current public cemetery is located on the Branovská Road. It was opened in 1977.